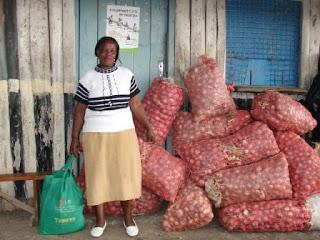 Onion farmers in central Kenya are receiving almost three times more money for their crops thanks to an initiative funded by FARM-Africa's Maendeleo Agricultural Technology Fund (MATF).
Before the initiative farmers had no way to store their onions after they had harvested them. This meant that they had to sell them as soon as they were harvested when prices were at their lowest. Each farmer had no choice but to sell his produce to local traders as soon as possible whilst the onions were still in good condition. The local traders would play the farmers off against each other, forcing prices down even further.
FARM-Africa has helped the onion farmers to form onion farming groups. The groups have been given the training they need to work as a marketing association (with around 20 farmer groups in each marketing association). The lead group in each association then helps all the members to decide together what a fair price would be for their onion harvest. If every group in the association then offers the traders the same price then they have no choice but to pay it if they wish to purchase onions from the village.
The groups also received training in how best to store the onions to prevent them from rotting. MATF funds paid for a demonstration site where a storage facility was built so that all the other groups could replicate it using the knowledge and skills that they had learnt.
Before the project farmers were receiving an average of around 10 pence per kilo of onions. The price is now around 28 pence per kilo.